Background: The aim of this study is to compare between various treatment modalities available for treatment of subaxial cervical spine injuries due to trauma

Materials and Methods: A total of 172 patients of subaxial cervical spine injuries were assessed retrospectively about their mode of injury, clinical course, definitive treatment given and its outcome. As the study was Descriptive and retrospective in nature involving only patient case files, statistical test is not applied to the study.

Result: In our study 44 patients suffered from vertebral body fracture while 108 patients had spinal canal compromise due to other injuries. 16 patients had quadriplegia, 24 patients had grade 4 power in upper and lower extremities, and roots were involved in 46 patients. In 44 patients complete corpectomy was performed with placement of tricorticate graft taken from fibula, this graft was fixed in place with titanium plate and four screws.

Conclusion: From this study it can be concluded that Patients treated with anterior approach had better outcome in relation to the fixation and fusion of the spine, reconstruction is more better in anterior approach.

There is difference of opinions among Neurosurgeons about treating traumatic subaxial cervical spine injuries by anterior and posterior approaches 1, 2 and also about using autologus and synthetic bone grafts for fixation. 3, 4

Our study consist of study of last three years cases of subaxial cervical spine injuries at our centre. The goal of this study is to analyse various methods used to treat these patients and their outcome in relation to clinical improvement of patient, fusion and stability of the graft and overall benefit achieved by patients.

These injuries include fractures of facet joint and disruption Of joint capsule. Treatment mainly include stabilization of facet joint either by immobilization or fixation of levels above and below the level of fracture.

Posterior coloumn injuries include, injuries of lamina and injuries of various ligaments and are less severe unless compromising on spinal canal. Treatment mainly include laminectomy with or without fixation.6

This study is Descriptive and retrospective study of patient case files only. Patients were managed first in casualty with primary resuscitation with trauma protocol and spine immobilization. Upon stabilization they were investigated with clinical and radiological investigations. Patients having minimal bony injuries or no bony injuries with or without spinal cord contusion on MRI were given conservative course of management.

Total 172 case records were analysed who were treated at Dept. Of Neurosurgery, At Tertiary care Institute. Of these 126 were male and 46 were females. Cause of injury were road traffic accidents in 106 patients, sports injuries occurred in 3, injuries at workplace like construction labor, porters, industrial workers were there in 52 patients, other causes like assaults was there in 3 patients.

In fourteen cases more the one segement was affected. Of these 16 patients had quadriplegia, 24 patients had grade 4 power in upper and lower extremities, and roots were involved in 46 patients. Remaining patients had less of neurological deficit. Body fractures were mainly associated with cord compression and associated quadriplegia. Root involvement presented differently in different patients with sensory, motor or mixed involvement

Incidence of C-Spine injury among males and females 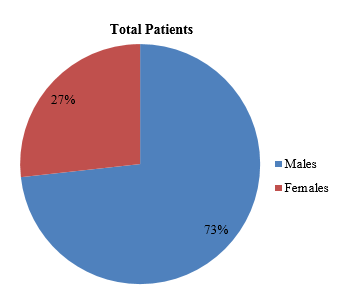 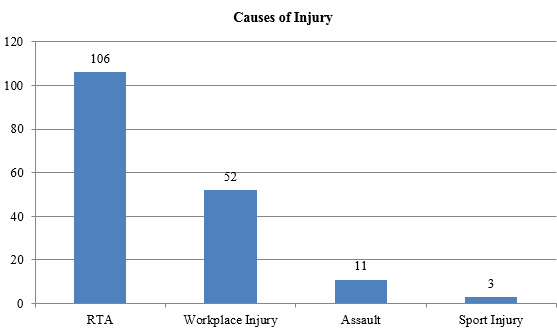 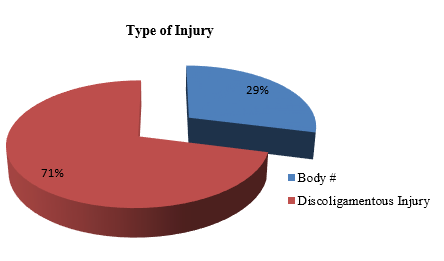 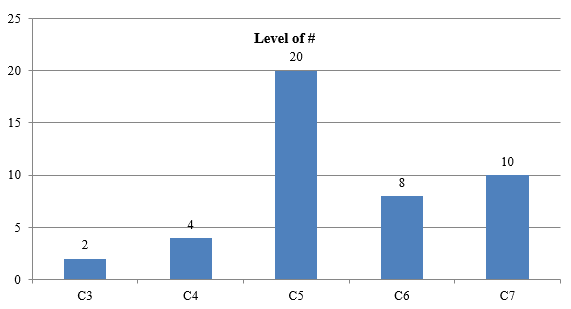 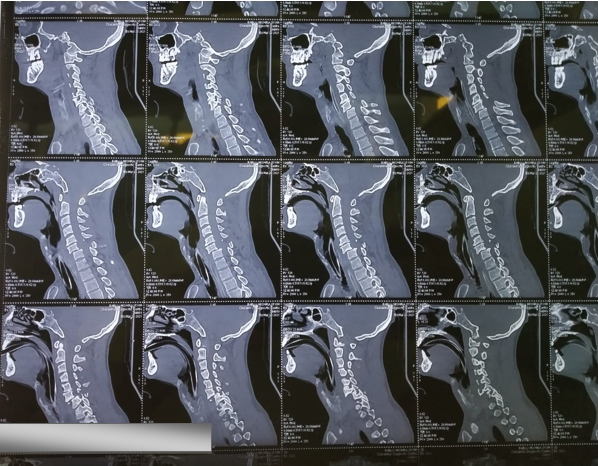 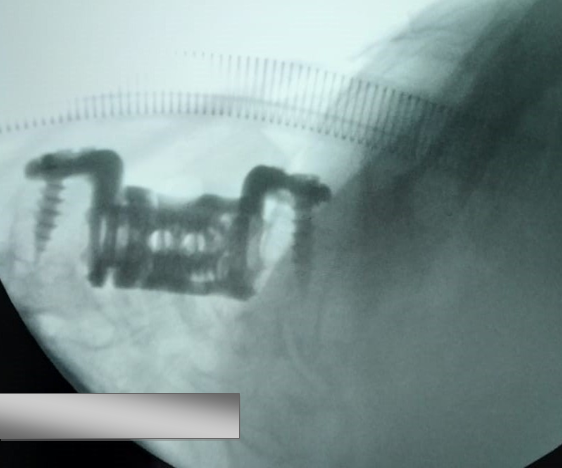 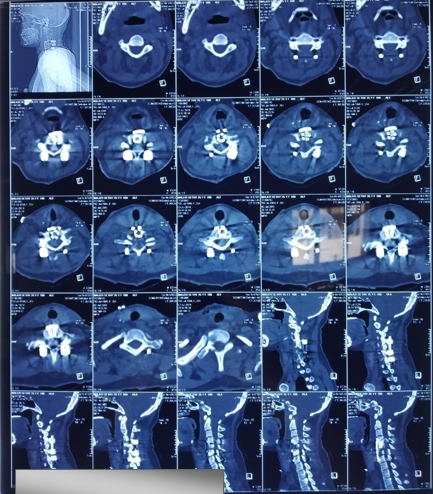 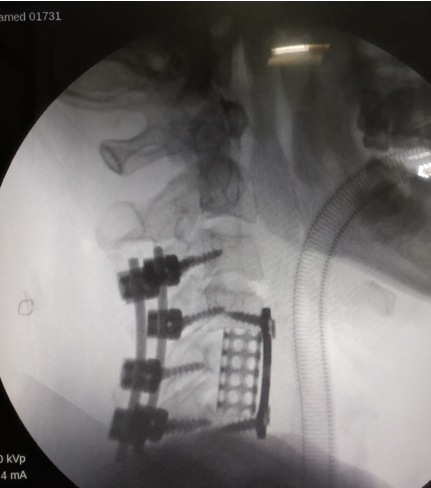 In 44 patients complete corpectomy was performed with placement of tricorticate graft taken from fibula, this graft was fixed in place with titanium plate and four screws. In other 78 patients complete corpectomy with fixation with titanium cage and plate/screws done. The cage was filled with autologus bone chips collected while doing corpectomy for fusion purpose in 66 patients while with G-bone in 12 patients. In fourteen patients operation done for more than one segmet. While 30 patients were treated for laminectomy and lateral mass screw fixation

Intra-op complications were nil in our study. Most of the patients needed 10 days hospitalization. Patients with incomplete quadriplegia recovered the most. Proper rehabilation, nursing care, family members participation and utmost physiotherapy played crucial role in gaining the power back to its maximum and improving overall health of the patients. It also helped increase morale of the patient

Both the groups showed utmost fusion with less of post op complications. Two patients in fibular graft group developed screw pullout and dislocation of fibular graft on fourth post op day, which needed reoperation and one patients in titanium cage group developed infection of the operative site with discharge of pus through incision site which needed removal of graft and was treated further.

Most patients showed improvement of power after removal of compressing segment but those with complete quadriplegia showed very minimal improvement. Deformity occurred due to trauma was corrected in most after surgery with very less of deformity remaining in a few.

The aim of surgery is improve weakness and to correct other neurological deficits, correct deformity, fix the unstable spine and to enhance the patients health back to its maximum. 7, 8

Anterior approach may be beneficial in following ways

Ulrich et al 15 and Coe et al tested several implants in cadaver and bovine spines, and they concluded that posterior approach is far better than the anterior one especially in associated ligamental injuries Ulrich et a1 said an additional external immobilization should be combined with anterior fixation, whereas Coe et al recommended posterior wiring techniques.

To summarise, above studies noted that posterior fixation were more better and more stable than anterior fixation, but the spine fixed with anterior implants achieve near normal anatomic contour. Also the weight bearing capacity is more of anterior implant than the posterior one. However in complete disruption, combined fixation from both anterior and posterior side achieves more stable construct and there is maximum deformity correction, although restricting movement of spine, but gives good stability to the spine.

Because of all these benefits, anterior approach was used more in our study while patients needing posterior fixation due to middle coloumn or posterior coloumn involvement or due to ligamentous injuries were treated with posterior fixation, while in some both approaches were used

In such scenario full radiological evaluation of patients with MRI and assessing at risk patient and modification of approach should be done.

Bombard et.al have compared both the approaches and concluded that among these anterior approach is more better due to less complication rate and more improvement in disability of the patient.

Perforation of esophagus as mentioned by some authours is not seen in our study.

Stability of the spine can only be achieved by proper reduction either closed or open reduction. Closed reduction is the preferred choice. According to Cloward, open reduction can only be done in completely quadriplegic patients but not in other patients. Cases of locked facet are first reduced by operating from posterior side and then anterior fixation can be done if needed. Before opting this canal compression must be ruled out.

Patients who need traction to align the spine should be given traction. Sometimes this may avoid the need for open reduction.

The author declares no potential conflicts of interest with respect to research, authorship, and/or publication of this article.

H H Bohlmann Acute fractures and dislocations of the cervical spine: An analysis of three hundred hospitalized patients and review of the literatureI Bone Joint Surg1979618111942