I was invited to my medicine post graduate student’s wedding in pre COVID (PC) era. As was the practise then, event managers ruled the roost. I never had the pressure to be in the top 50 of the groom’s or bride’s contact list, as became the precept in post COVID (PoC) era. I was one among the thousands in a melee trying to get a foothold within the grand durbar.

With both groom and bride hailing from well heeled doctor communities, it was a lavish resplendent spread. With a Bacardi in hand, I was listening to the boring encores meted out by a ludicrous DJ. As the painful auditory assaults tapered off, the bride and groom made their grand appearance – not with their parents in tow as was the practice in the past, but with chaperones on either side appointed by their respective event managers. Armed with microphones, accompanied by a barrage of verbal diarrhoea and cretin IQs these chaperones were a dangerous concoction. A sparring match was about to start.

The calorifically endowed pugilist looking lady from the groom’s side started the proceedings stating how the groom saved a whelp from a ditch in pitch dark, when he was just in kindergarten. As backdrop the overhead projector threw some canine rescue scenes sans the groom, which I thought should have been photoshopped to fake some originality. The bride’s side chaperone, not to be left behind, quipped how like an angel she gave her only pen to her friend for final exams and still came topper. Also, how their confusion regarding the colour of the bride’s trousseau was finally cleared by Sabyasachi, by settling for fuchsia. I don’t think she would have had so much confusion and agony during her entire medicine career, as when doing her bridal shopping, God only knows what future beholds – wait till the naming ceremony of their child. They might as well have kept the price tags on their clothes or someone like me could have never imagined that a laced up night dress, labelled as bridal attire could cost so much. Obviously it’s the occasion that jacks up the price, just as airlines squeeze last minute emergency passengers with triple and quadruple rates. But if a doctor does the same for an emergency consultation / surgery at odd hours by hiking his fees, the whole wrath of mob and media shall descend upon him. 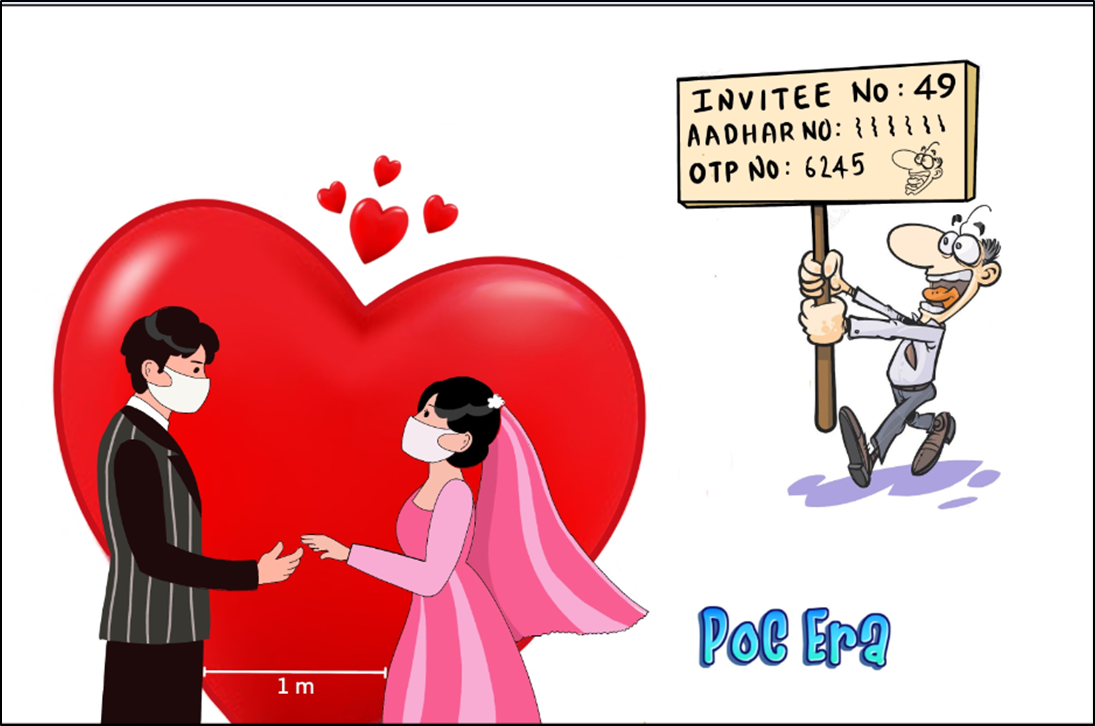 I vaguely heard something about Matira beach and French Polynesia, where the bride wanted to spend her honeymoon with underwater shoot. Like the Trump’s trumpeting this semi hectoring continued for many hours, till there was just me and the stewards left as audience. I was glad that despite four shots of Tequila neither side ventured to deliver the details of the bachelor/ bachelorette party. If so, some very serious deliberations and decisions would have happened that night, which would have given enough meat and scope for a wedding thriller Netflix series rivalling “Made in Heaven”.

Now as I attend a PoC era wedding, it’s almost like a funeral in a VIP precinct. I give my phone number at the entrance, my photo ID matched with their invitee guest list and I am supposed to stick to a certain spot encircled for me. Felt as if a Lakshman-rekha has been drawn and I, trapped within that crease. Step out and risk being stumped. I hit the escape button and vanished in a whiff.

If we chose our flamboyance judiciously in non-copious, nontoxic amounts it might as well be palatable. A total absence of the same might make situations absolutely bland and overwhelmingly unbearable. What a paradigm shift instigated by a studded spherical entity!!

Post script: Now I presume the bride would be happy if she can go to the nearest multiplex, watch a romcom and eat popcorn in peace with her spouse.