Chakraborty and Pal: When doom is vincible but imperceptible

When doom is vincible but imperceptible

An eighty-year-old gentleman without any comorbidity or significant medical illness had presented with headache of recent onset. A detail clinical evaluation and imaging (MRI of brain) ruled out secondary cause of headache. A month later, he presented to emergency with altered sensorium and quadriparesis. Repeat brain imaging revealed bilateral subdural hemorrhage requiring emergent surgery. He was back to normalcy within few days postoperatively. A confession was obtained about his daily habit of induced vomiting after drinking large amount of water (kunjala kriya).

The repeated habit of induced vomiting might have been responsible for the slowly evolving subdural hemorrhage. Interestingly, though he had significant clinical symptoms at the initial presentation, he had normal initial MRI of brain (the more sensitive imaging modality). Our case highlights the interesting neurophysiology of subdural hemorrhage and the importance of close monitoring of elderly patients of recent onset headache.

An eighty-year-old gentleman without any known comorbidities, complained of new onset dull aching, continuous, moderate grade holo-cranial headache. Within few days of the onset of headache, he attended OPD with one episode of early morning postural dizziness and syncope. His clinical examination was within normal limits. The blood parameters (including inflammatory markers), detail cardiac and neurological evaluation were unremarkable (MRI with MRA of brain and cervical spine were non-contributory). Although, there was no history of recent systemic illness or injury, he confessed about habit of induced vomiting after drinking four liters of water every morning (Kunjala Kriya) for years.

He had no further dizziness or syncope once we stopped his habit of induced vomiting. However, continued to have mild heaviness of head even with symptomatic treatment and we planned for a close watch and regular follow up.

An emergent burr-hole drainage of SDH was performed and he was back to normal within three days. There was no complain of headache, postural dizziness, or syncope henceforth. The new onset of the symptoms in this elderly gentleman and complete resolution post-surgery, proved that it was due to the gradually developed bilateral SDH. 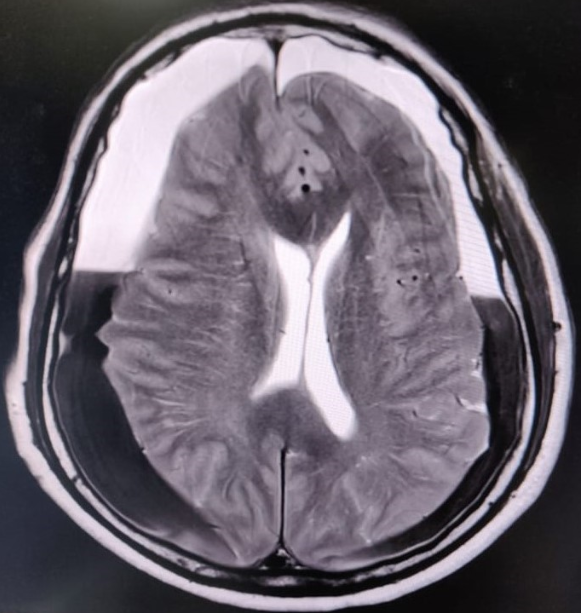 It is known that CT scan of head may not detect a subdural effusion that precedes chronic SDH immediately after injury but becomes apparent one-seven days later.1 Still, we had no evidence of effusion or bleed in a more sensitive imaging modality (MRI of brain) done even after ten days of symptom onset.

Though a forgotten trauma is a quite common cause of SDH in elderly, the etiology in our case is most likely the habit of induced vomiting. A forceful exhalation against closed glottis increases intrathoracic pressure thereby decreasing central venous outflow.2 The sudden and sustained pressure is transmitted through fragile bridging veins in these susceptible individuals resulting in subdural hemorrhage.2 The physiology of chronic subdural hematoma is complex3 and in early stage even MRI of brain may miss the evidence of blood and patient may land up in a life- threatening situation.

We acknowledge the faith patient and his family kept on us during difficult times.