Sjogren’s syndrome (SS) is common autoimmune diseases manifesting with various glandular and extra glandular features which are difficult to evaluate and manage. Hypokalemic flaccid paralysis may be the rare extra glandular clinical manifestation of SS. We present a case of acute flaccid paralysis which on evaluation turned out to be primary sjogren’s syndrome (pSS). We present a case of 30 year old young woman with no known comorbidities presented with acute flaccid paralysis. Her evaluation reveals severe hypokalemia with K+-1.6 meq/l, metabolic acidosis with pH-7.28 and urinary pH ≥6.5. An initial diagnosis of hypokalemic periodic paralysis (HPP) secondary to distal renal tubular acidosis (dRTA) was made. She was later found to have sjogren’s syndrome on the basis of positive ANA & Anti-Ro (SS-A) Antibody and salivary gland biopsy. She was managed with potassium supplements, sodium bicarbonate and immunomodulators. Primary Sjogren’s syndrome usually associated with distal renal tubular acidosis which may cause hypokalemia leading to HPP, rarely which may be the initial presenting symptom in young women as in our case. Early diagnosis and treatment of these patients would lead to less complication and better quality of life.

Metabolic and electrolyte abnormalities leads to several types of periodic paralysis with first ever description in 1727 by Musgrave.1, 2 Hypokalemic periodic paralysis (HPP) is commonest of all metabolic myopathies with prevalence of 1 in 100000.2 It is characterized by acute flaccid paralysis ranging from transient muscular weakness to potentially fatal severe respiratory muscle paralysis and cardiac arrhythmias. HPP is manifested by varying group of disorders mainly thyroid disorders such as thyrotoxicosis, renal tubular dysfunctions such as distal renal tubular acidosis (dRTA), Gitelman’s syndrome and non-renal loss of potassium in the form of diarrhea, recurrent vomiting and excessive sweating. Distal RTA may be inherited or acquired with autoimmune disorders such as Sjogren’s syndrome, Systemic lupus erythematous and rheumatoid arthritis were main acquired disorders.

Sjogren’s syndrome is chronic autoimmune connective tissue disorder characterized by lymphocytic infiltration of the secretory exocrine glands mainly salivary and lacrimal glands.3 It may present with extra glandular manifestations in form of renal, respiratory, neurologic, hepatic, cutaneous and vascular involvement. Sicca syndrome which is combination of dryness of oral cavity, pharynx, larynx, eyes and vagina without any association with other autoimmune connective tissue disorder is called as primary Sjogren’s syndrome (pSS). Association of sicca syndrome with various rheumatic disorders such as rheumatoid arthritis, systemic lupus erythematous and systemic sclerosis is called as secondary Sjogren’s syndrome (sSS).4 Rheumatoid arthritis is most commonly associated with sSS with prevalence of 20%.5, 6 SS may present as hypokalemic periodic paralysis as initial presentation which was first described in 1981.7 We report a case of pSS presented with hypokalemic periodic paralysis.

A 30 year old lady was brought to emergency with complaints of acute onset, progressive quadriparesis of 2 days duration with involvement of neck and trunk. Muscle cramps, dysphagia and difficulty in breathing were also present. She had no significant past history. On evaluation she was afebrile, blood pressure 104/60 mmHg, pulse rate 78 per minute and respiratory rate of 19 per minute. Her single breath count and breath holding time were 16 sec and 20 sec respectively. On nervous system examination she had decreased muscle tone, proximal and distal muscle strength 2/5 in all four limbs with diminished reflexes. A provisional diagnosis of acute flaccid paralysis was made and further laboratory investigation reveals severe hypokalemia of 1.6 meq/l, metabolic acidosis with ph-7.28, pCO2-22 mmHg, HCO3—-10.3 mmol/Lt and creatine phosphokinase of 1001 IU/L. ECG shows prominent U waves, haemogram reveals Hb – 12.3 gm%, total leukocytes- 9370/mm3, and platelet of 268000/mm3, while liver and renal functions were in normal range. Urinalysis reveals ph-6.5, Na+-92.3 meq/l and K+-23.2 meq/l and thyroid functions were in normal range. Imaging studies with MRI brain and cervical spine were normal [Figure 1]. The initial evaluation was suggestive of distal renal tubular acidosis (dRTA). She was managed with intravenous potassium chloride, sodium bicarbonate and supportive care. Her condition improved with treatment and further evaluation revealed significant positive anti-nuclear antibody titers of 1:320 with speckled nucleolar pattern, positive Anti-Ro (SS-A) Antibody of 200RU/ml (>25 positive), normal C3 & C4 and negative anti-La (SS-B) Antibody. Labial salivary gland biopsy shows focal lymphocytic sialoadenitis with periductal lymphoid cell infiltration [Figure 2]. Based on positive ANA and Anti-Ro (SS-A) Antibody with distal RTA diagnosis of primary sjogren’s syndrome was made which was further confirmed by labial salivary gland biopsy. She was started on Deflazacort and Hydroxychloroquine (HCQ). Her condition improved with the treatment and she was discharged on potassium citrate solution, sodium bicarbonate and HCQ. She was on regular follow up and remains asymptomatic. 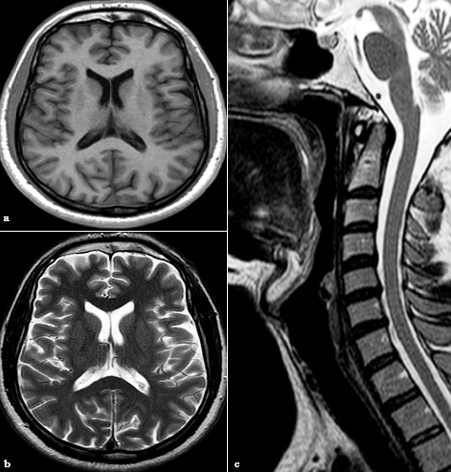 H&E stained sections of labial biopsy show denselymphomononuclear inflammatory infiltrate in the stroma (arrow) with involvement of ducts by the chronic inflammatory cells (star) (1a; 100x, 1b; 200x, 1c; 400x).

Sjogren’s syndrome presenting as HPP was first reported in 1981;7 after that till now only few cases were reported and in India first case was reported in 1996.8 Kulkarni et al had done cross sectional retrospective study from database maintained at Centre for Rheumatic Diseases, Pune since 1996 with records of over 50000 patients and found a total 16 (0.032%) patient of pSS with initial presentation with HPP.9 They found younger age of onset, female dominance, ANA and SSA positivity in these patients of pSS with HPP which is similar to other case series studies as well as in our case.10 Hence early diagnosis of this small subset of patient is required for better management.

Our patient presented with acute progressive flaccid paralysis. She was having no previous comorbidities and normal sensory examination therefore AIDP and HPP were considered after ruling out infective and traumatic etiologies. The diagnosis of HPP was made due to severe hypokalemia and prompt response to potassium supplements. Diagnosis of dRTA was considered due to metabolic acidosis with urinary ph ≥ 5.5. Distal RTA is mainly of primary (Inherited) and secondary (acquired) types. Primary dRTA may be inherited as autosomal dominant or autosomal recessive forms and involves SLC4A1, ATP6V0A4 or ATP6V1B1 genes which are responsible for managing levels of acid base in the body.11 Acquired dRTA mainly caused by autoimmune disorders (Sjogren’s syndrome, Systemic lupus erythematous or Rheumatoid arthritis), calcium disorders (primary hyperparathyroidism, idiopathic hypercalciuria with nephrocalcinosis), dysproteinemic syndromes, drugs and toxins.11 Patient with dRTA usually present with normo- or hypokalemia. ACR/EULAR developed classification criteria for pSS in 2016 which applies to the individuals that have a score of ≥4.12 Our patient was diagnosed the pSS with total score of 6 with labial salivary gland biopsy having focal lymphocytic sialadenitis and focus score of ≥1 foci/4 mm2 and positive Anti-Ro (SS-A) Antibody. In pSS renal involvement is well documented and two main forms are glomerulonephritis and interstitial nephritis. About one third of the patient are associated with interstitial nephritis which manifest mainly as complete or latent distal renal tubular acidosis and proximal RTA rarely.13 Distal RTA is associated with hypokalemia which is caused by decreased distal tubular Na delivery, defective H-KATPase, bicarbonaturia and secondary hyperaldosteronism.11, 14 In primary Sjogren’s syndrome HPP may occur three months to four years prior to development of sicca syndrome.15, 16 Systemic (extraglandular) manifestations such as HPP with dRTA of Sjogren’s syndrome are managed by immunomodulatory therapy such as hydroxyl chloroquine (HCQ), mycophenolate mofetil, corticosteroids, cyclophosphamide and biologic therapies such as rituximab . Our patient was initially managed with tab Deflazacort 6 mg and tab HCQ 400 mg once a day. Later steroid was tapered off while HCQ continued and she remains asymptomatic till date.

We report this case to emphasize that young women presenting with HPP should be screened for dRTA and other extra glandular features with clinical suspicion for pSS for early diagnosis and initiation of appropriate treatment.

No financial support was received for the work within this manuscript.

The authors declare that they have no conflict of interest.