Objectives: To know the efficacy of the indices- Fibro Q test, AAR, APRI as markers of Fibrosis in CLD. To know which among these indices would be the high sensitive marker of liver fibrosis.

Materials and Methods: This study includes 60 subjects, out of which 30 were clinically diagnosed as CLD and were confirmed by abdominal ultrasound and 30 were age matched healthy controls.

Chronic liver disease can vary from mild hepatic inflammation without fibrosis to advanced hepatic fibrosis and cirrhosis.1 Liver fibrosis results in cirrhosis that in turn can lead to liver failure and hepatocellular carcinoma.2, 3 Assessment of the stages of liver disease is important for diagnosis, treatment and prognosis. Liver biopsy & ultrasound are the standard methods for assessing fibrosis in CLD.

Liver biopsy is an invasive method. Biopsy has disadvantages like patient discomfort, hospitalization for 4–6 hours after biopsy & sometimes associated with serious complications. The use of ultrasound for the confirmation of complications during biopsy procedures increases the cost of treatment and may also increase the duration of hospitalization. The accuracy of liver biopsy is limited due to sampling error and intra- and inter-observer reporting in histological staging.1

Although, only few patients progress to clinical stages of fibrosis, early identification may significantly prevent cirrhosis and hepatic carcinoma. Many non-invasive markers for assessing fibrosis have been developed and used by physician. They have been evaluated in different studies, and some were found to be highly accurate in the assessment of liver fibrosis when compared with liver biopsy and ultrasound.1 Fibro Q test (FQT), Aspartate amino transferase – Alanine amino transferase ratio (AAR) & Aspartate amino transferase- platelet ratio index (APRI) are the three non-invasive and simple indices proposed for assessing fibrosis in CLD.

Hence, the aim of this study was to evaluate and compare the diagnostic accuracies of FQT, AAR and APRI for the prediction of significant fibrosis and cirrhosis in patients with CLD.

Objectives of the study

Our study included 60 subjects, out of which 30 were clinically diagnosed as CLD and were confirmed by abdominal ultrasound and 30 were age matched healthy controls. This study was conducted in tertiary care hospital. Study had no conflicts of interest &Institutional Ethical Clearance was obtained. Informed consent from all the individual participants was obtained.

According to our study, Fibro Q had p value of 0.0001, AUC was 0.9902 with specificity and positive predictive valve of 100%. Hence Fibro Q can be considered as highly sensitive marker than AAR & APRI in the prediction of significant fibrosis in CLD. 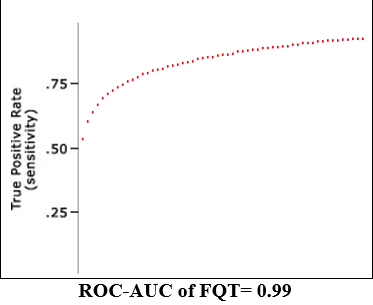 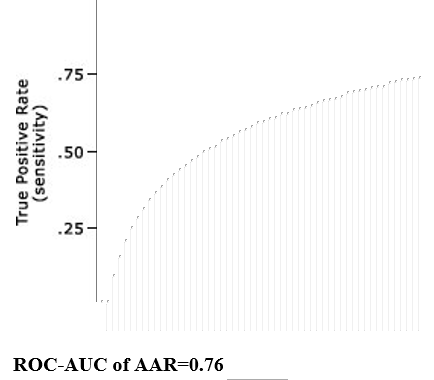 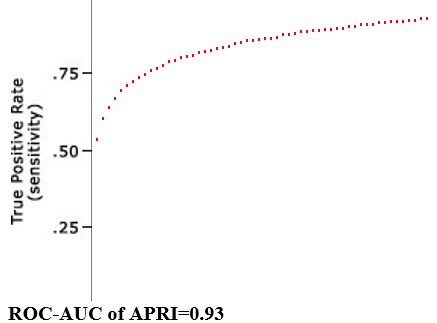 Comparison of age and other parameters between cases & controls value <0.05 is considered as statistically significant

CLD is an imbalance between fibrogenesis and fibrolysis, due to which excess collagen depositionoccurs, leading to fibrosis and later scar formation yielding hepatic cirrhosis.4 In liver fibrosis, appearance of new biomarkers in the serum occurs due to the underlying pathological changes.3 The gold standard for diagnosing fibrosis is liver biopsy. Scoring system of liver fibrosis is assessed by collagen staining of biopsied liver sample. Major limitations of liver biopsy are fibrosis staging system,5 sampling error6 and inter-observer variation by pathologists in staging the fibrosis.7 Hence for assessing fibrosis in CLD, there are few serum based non-invasive markers. These can be analyzed frequently and also helps in assessing the efficacy of the treatment.

The individual markers for assessment of liver fibrosis are:

These tests only provide information about important aspects of liver function but cannot assess severity of liver fibrosis or cirrhosis individually.8 Some studies have reported that due to the limitations of individual markers to assess liver fibrosis, indices combining the markers improve diagnostic accuracy.9, 10

Fibro Q, AAR & APRI were considered as few non-invasive markers for assessing liver fibrosis in CLD which involved combination of markers like AST, ALT, platelet count & prothrombin time.1 A series of indices of non-invasive serum markers showed 93-95% accuracy in the detection significant liver fibrosis and a reduction of 50% biopsy in this subset of patients. Liver fibrosis stage is correctly diagnosed in only 65% of cases, if the biopsy is at least 15 mm long, 75% if it is at least 25 mm long and the optimal size of biopsy should be 40 mm. However, most biopsies do not fulfill these optimal criteria.11, 12 Data analyzing the discordance between liver biopsy and the indices showed that this discordance was attributed to biopsy in 5% and for the indices 2%.13 These shortcomings of liver biopsy lead to underestimation of the diagnostic accuracy of non-invasive markers. The error in the liver biopsy report itself makes it impossible to distinguish a perfect non-invasive marker from less valid assays.14 This supports the assumption that non-invasive markers might be underestimated using liver biopsy as reference method.

Etiologically different stages of fibrosis require the use of indices that assayfibrogenesis, oxidative stress markers, in addition to liver specific marker. The limited number of variables in APRI may minimize its potential in monitoring the basic events in scar formation. Yilmazet al., demonstrated that APRI should be used with caution because their sensitivity in predicting fibrosis is strongly influenced by the etiology of fibrosis.23 An additional limitation of APRI is its inability to identify mild forms of liver fibrosis. In fact, AST levels in serum and platelet counts become altered mainly in advanced stages of hepatic disease; thus, APRI could be ineffective in detecting early liver fibrosis.

AAR was raised significantly in CLD patients in our study and hence efficient as a marker of fibrosis but was less sensitive than FQT & APRI. Fujii calculated AAR & APRI indices in hepatitis C patients & concluded that these indices are as good as non-invasive laboratory tests to predict fibrosis.24

Lackner & Kim25, 26 study showed diagnostic accuracies of AAR and APRI index in chronic hepatitis C & CLD and observed that diagnostic accuracy of APRI was superior to that of AAR for prediction of fibrosis, which is in accordance to our study. Liu demonstrated a low accuracy of APRI and AAR for predicting significant fibrosis in viral hepatitis C carriers with persistently normal ALT levels.27

Bourlieret al studied Fibro Q test & APRI and reported 90% accuracy in diagnosing CLD, in whom liver biopsy was avoided in 46% & 45% respectively and concluded Fibro Q test as a better marker than APRI, which is in accordance with our study.28

Sabastianiet al reported that FQT is more sensitive than APRI in diagnosing advanced fibrosis with >95% and 94% accuracy respectively, which is in accordance with our study and the study also showed that the requirement for liver biopsy was decreased by 60–70%.12

Hsieh evaluated patients with chronic viral hepatitis & calculated the Fibro Q, AAR and APRI for assessment of liver fibrosis & concluded that Fibro Q performed better than APRI, but was equal to AAR, in the prediction of significant fibrosis.29

According to our study, all three indices are efficient as markers of fibrosis in CLD but Fibro Q test is highly sensitive than AAR & APRI.

No financial support was received for the work within this manuscript.

The authors declare that they have no conflict of interest.